The Ramans do everything in threes.

I’m amazed that still no one has done a film about this book, Arthur’s C. Clarke Rendez Vous with Rama. I’ve read this one a few times. For me is one of the best ones from his author. Maybe, the idea can be like Solaris but here is less about philosophical ideas and more about just simple exploration. It is a much more straight forward and easy to read novel. Some say that it even has no real plot. And that if someone would make a film of it, it would just look like a documentary about exploration of an alien place. And that’s all right. Is precisely that, a description of an alien environment. And still, one just cannot stop reading, looking for more answers, new places, new things. The curiosity increases with each page turn. But there is no sense of conflict in the story, or between the characters, or anything. Maybe that’s why it maybe difficult to translate this to a film.

An object approaching our solar system is detected. An expedition is sent, because that object is known to be a gigantic cylinder. When the expedition arrives, they have to manage a way to this space ship, that apparently has no doors. When they find their way to the interior of the cylinder, what waits for them is just darkness. The novel basically creates a mental image of the interior of this ship. It doesn’t give you answers about what this cylinder is. Who made it. What is doing in our vicinity in the solar system. The sense of scale is amazing: 8 km long stairs. 50 km from north hemisphere to south. A sea belt 10 km wide in the middle of the cylinder. Structures high as cities. It’s own internal weather. Artificial day and night. Weird findings like three-legged spiders, sharks in the sea, trash processors in the cities. They call them biots. It is not clear if there were living beings or robots of some kind. Everything is shown little by little, step by step. Only one thing was clear at the end. Ramans do everything in threes.

This little novel became a bit of obsession for me. And that obsession drove my to read this more than a couple of times. I even started a home project using CG tools trying to recreate that environment. Some day I will try to finish it. You can find loads of visual interpretations of how Rama and its inhabitants should look: 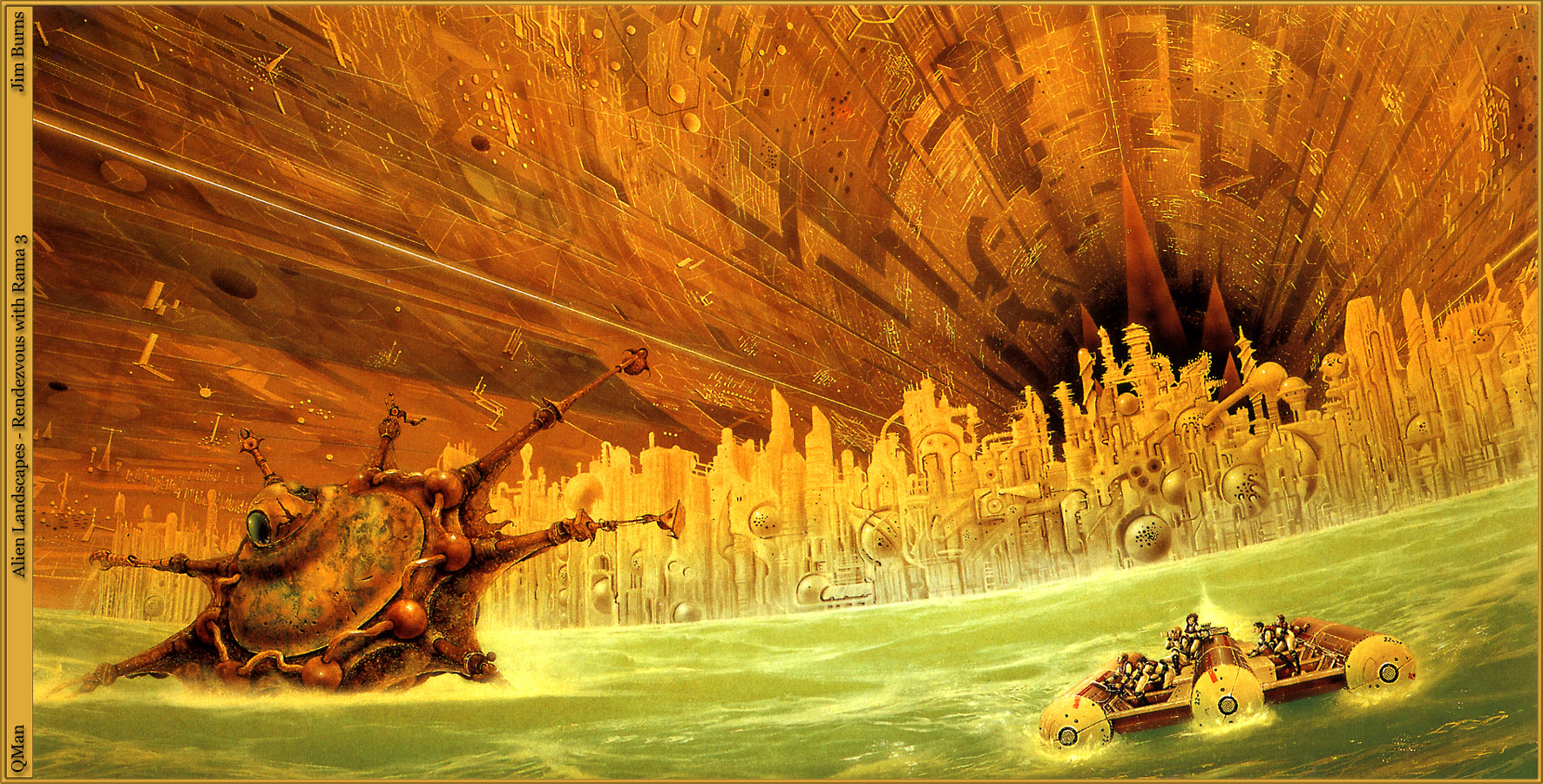 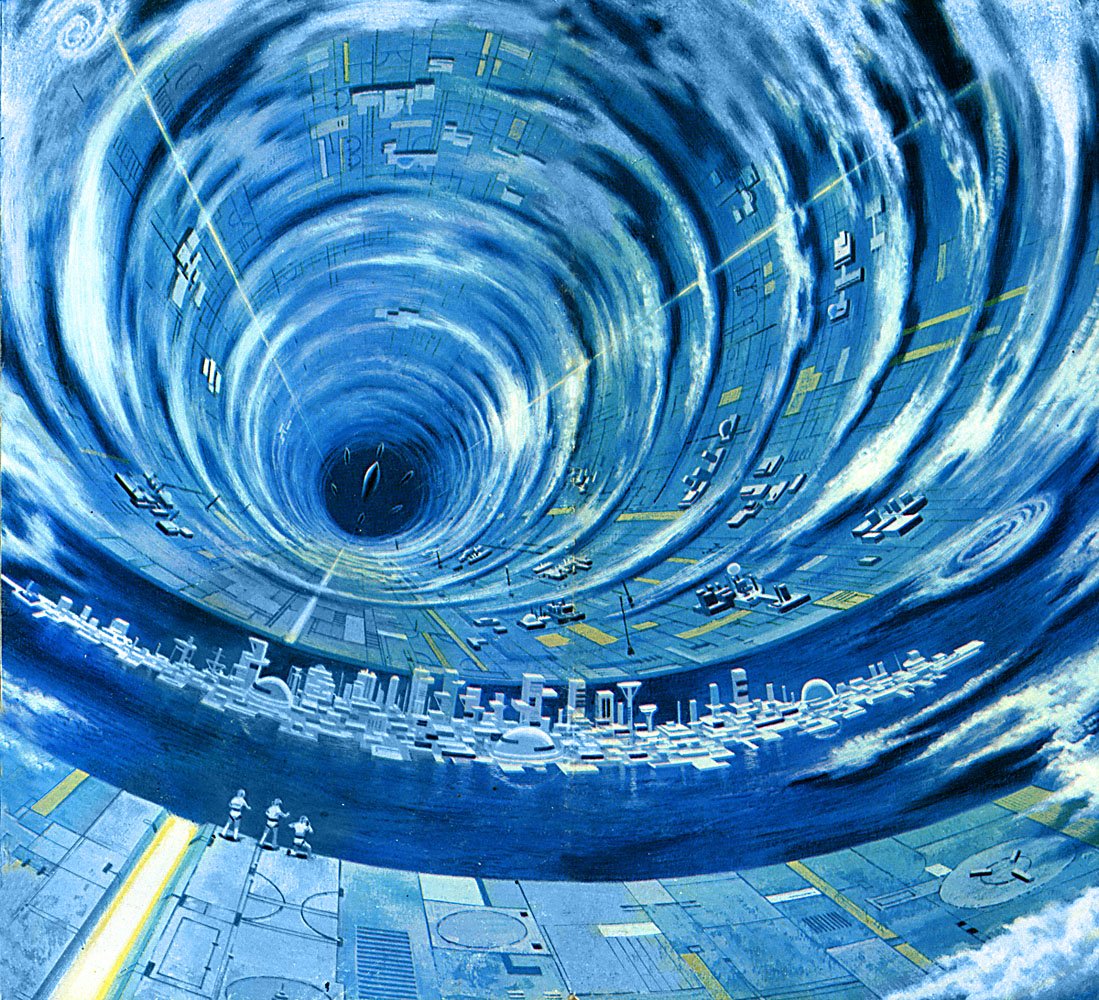 And this leads me to my first question. Why there is no film about this? It seems that David Fincher was trying to make one since 2000. Starring Morgan Freeman. Not much has transcenced about this project, it looks abandoned since then. This quote tells what their intentions were at some point:

“We wanted to make a film that when kids leave the theatre they don’t buy action figures, they buy a telescope.”

In this site, Stel Pavlou talks about a script draft that was delivered to Morgan Freeman and David Fincher in 2008. But nothing new about this possible film.

This short film made by students looked really promising, the ending is just great, although the CG looks dated for today’s standards:

And here, a great critic of the book, although I would really like to see a film made of this:

I know that most of the times, films based on books are not the best thing, but this is something I would like watch.

There are also some an old games, graphic adventures, based on this. One from 1984, and another made in 1996. Some of the images posted here are from the user’s manual of those games. And lastly, there are sequels to the first book. To be honest, I found them a bit disappointing. I think they try to explain too much. And that somehow spoils the original idea.

One response to “The Ramans do everything in threes.”